“and asking ourselves, if some LM reach higher education against all odds, what combinations of factors and circumstances have enabled them to do so” (Kanno 2004, p. 245)

I arrived to Japan in August 2007 ready to start high school and without any knowledge of Japanese. I found this school in Osaka prefecture where they accepted up to 14 foreign students per year with no previous Japanese language knowledge required. The entrance exam consisted in three tests: math, English and an essay written in your first language (Spanish in my case). They allowed me to use a dictionary Japanese-Spanish during the tests so it would help me understand what I was asked to do.

Classes started in April, and I remember getting to school all nervous. I met my new classmates to find myself in a class of about 40 students, and all the foreign students (we were 8 that year) were place in the same class. Even though my classmates and teachers were really friendly, I remember feeling really isolated the first few months because I was the only one in the entire 2008 class of about 140 students who could not communicate properly with anyone.

This school was a public school, and from what I was explained, not a very good one given that it’s placed in the middle of the ranking of “how good” or “how difficult” it’s to get in. My teachers would tell me that it was “average” in terms of education. Most of the students graduating from this school would choose to find a permanent job, or would go to specialized schools (senmon-gakko) upon graduation. Still, there was a big number going to university, all of them private and not that well-known, so I remember getting laughed at when I said I wanted to go to Ritsumeikan, because this university was outside the possibilities of my high school. I noticed, though, that the foreign students would go to better universities than most of the Japanese students. In my class, out of us eight, 6 students opted for tertiary education upon graduation, and 4 of those got accepted to either Ritsumeikan University or Kansai University, two of the most prestigious universities in the Kansai area.

Before the year started we were asked to take a Japanese test designed by the school to place us in JSL classes based on our proficiency at the time. There was a big gap between those students who went to junior high school in Japan and those of us who just arrived. In our first year, at the beginning we were all pulled out of our home room and taken to the remedial classes, but sometimes we would be allowed to take classes with our Japanese peers in our home room to see if we could follow or not. I took all of my academic classes, except for English and math, in another classroom, but this varied from student to student depending on their Japanese language proficiency or, in my case, how good one was in that particular subject. In the remedial classes, all of us would carry dictionaries, and were encouraged to stop the class if we had any questions. All of the teachers from the remedial classes would summarize the content in handouts with ‘furigana’, sometimes adding drawings, graphs and even technical words written in our mother tongue for us to understand it better.

The school was flexible in its curriculum allowing their students to choose up to more than half their subjects by 3rd year. The school encouraged foreign students to keep studying their mother language, so it set up “first language” classes for us even if they only had one student for certain languages (like it was my case). To be honest, I sort of refused to take this class because it made me feel even more isolated and the teacher, although a native speaker, was not prepared to teach a high school level student in Spanish. The content was very basic, and she ignored the differences between the way Spanish is spoken in Paraguay and the way it is in her country, sometimes even making fun of my choices of words. By my third year I refused to keep on taking Spanish classes and decided to focus more on Japanese.

The school offered a variety of after school clubs, and one of them was the “Tabunka-koryu-bu” (Multicultural exchange club), to which all the foreign students were active members of. Moorehead (2013) described in his research the ‘Amigos’ room where the students would go to study or to relax from their stressful school environment, we used to call this place the ‘Tabunka room’ at my school. We were called in once a week after class to discuss extracurricular activities like festivals or international exchange reunions we could participate in. There was an active group of teachers in Osaka prefecture who organized numerous international exchange reunions through out the year; they seemed to keep up to date about the curriculum, the students and teachers of other schools to provide mutual support. All the foreign students were welcome to the Tabunka room, which we considered our “safe place.” As Moorehead (2013) described, most of the foreign students would go to this room to talk, play and just relax from our stressing ‘trying to fit in’ life in our home rooms. However, there would always be a teacher there who would usually help us with our homework, sometimes the teachers would hear that we are not doing good in certain subject so they would make us stay after school to study and offer guidance.

The JSL classes weren’t easy; they would be heavy and condensed, a lot of grammar and kanji to learn. The aim of the school was that by the time its foreign students reached senior year they wouldn’t need remedial classes and would be able to study with their Japanese peers in their home rooms. The foreign students were strongly encouraged to take JLPT exams every year, and the ultimate goal was to obtain N1 by senior year. The teachers would set up re-enforcement classes after school, or even during the summer/spring break for subjects that couldn’t be tackled during school hours like preparation for interviews (for university entrance or work), JLPT practice exams, essay academic writing, etc.

As Kanno (2004) and Moorehead (2013) pointed out, JSL education and support for foreign students vary depending on the school and prefecture. I would want to add that it might also vary depending on the level of education, given that in high school the system is designed for students to carry more responsibility than they would in middle school, expected to choose a future path and to find the best way to achieve their goals relying more in previously acquired knowledge than on their parents or teachers; whereas in elementary and middle school the students carry less responsibility, leaving this to parents and teachers alike. Since the school I attended to only accepted 14 students per year, I’m left wondering what happened with the ones that don’t get in. Do they go to other schools? Or they just don’t attend any? The fact that the government has a budget for this kind of programs shows that there’s recognition for diversity in the education system, but as Moorehead (2013) and Kanno (2004) showed, it’s not standardized.

Robert Moorehead‘s research, “Separate and Unequal: The Remedial Japanese Language Classroom as an Ethnic Project,” addresses education for immigrant children in a Japanese elementary school. He examines the connection between the Japanese as a second language (JSL) classroom and the school’s homeroom classes, as well as the impact of the JSL class on immigrant children’s academic development.

The teachers of the elementary school claim that the JSL classrooms not only help the immigrant students to learn the Japanese language but also enable them to relax from challenging situations in an effort to adapt to the Japanese culture and language. The research reveals that although professional norms in Japanese education value equality, collectivity, and mutual interdependence, the JSL classrooms separate those immigrant children from the regular Japanese students in the homeroom class, by which the gap between the immigrant children and regular children never disappears.

Is this an effective way of educating the immigrant children? I don’t think so. In this blog post, I’d like to discuss the experiences of my friend (fully Japanese) who moved abroad and received education in a context outside Japan at the age of 7, and argue that the way the JSL program attempts to educate immigrant children is not effective.

My friend was born and raised in Japan until the age of 7, when she moved to Switzerland due to her mother’s job. Like a normal Japanese child, she had gone to a Japanese kindergarten and elementary school. Since she had had no previous English education, she initially had an extremely hard time learning English to understand her teachers. Unlike the immigrant children that learn Japanese outside their homeroom classes, she was in the ESL (English as a second language) class only for the first 3 months, and after the 3 months she was treated the same way as the other students. She also went to a Japanese school every Saturday to maintain and improve her Japanese.

The reason why she was in the ESL class only for the first 3 months is that the level of English used in the ESL class was not much different than that of other students because they were only 6-7 years old. She also reports that whenever she was pulled out of the class, she felt “embarrassed and isolated.” She doesn’t know whether the teachers sensed her feelings, but she is glad that she quit taking the ESL so that she stopped feeling uncomfortable any more. After leaving the ESL class, she learned English ‘naturally’ on her own just by studying with the other students without being isolated.

Those who believe in the effectiveness of the JSL program in educating immigrant children in Japan would have to say that she could not have learned English to reach the regular students’ standards. However, the fact is that she quickly learned English to the point where the others would not be able to tell she was not a native English speaker, and she was doing just as well as the other students whose native language was English. In fact, she says she now speaks English even better (or more comfortably) than her Japanese. She not only moved on to high school but also to a university in Canada. I have a few other friends that went through a similar situation as hers, and they all learned English without being isolated from the native students and brought their English to the native level.

Moorehead’s study mentions that while 97 percent of Japanese youths aged 15-18 are in high school, only 42 percent of Brazilians and less than 60 percent of Filipinos go to high school. In contrast, all of the friends of mine that went abroad and acquired English are now in university. This clearly implies the ineffectiveness of the present JSL program. 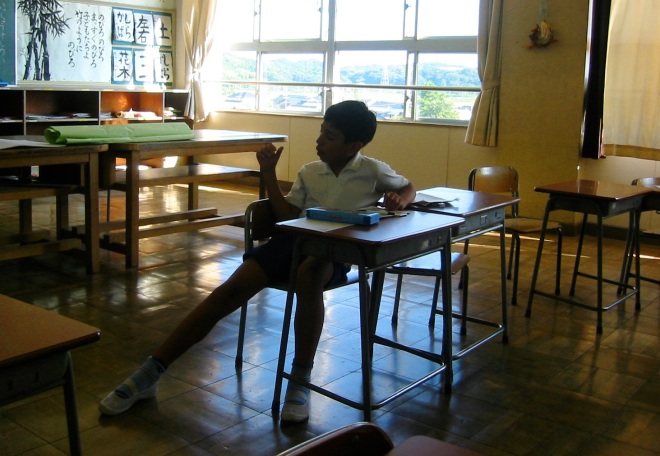 My article in The Asia-Pacific Journal examines the remedial Japanese language program at a school in central Japan. I argue that the program systematically denies educational resources to low-performing immigrant students. Despite the Japanese educational model of equality and inclusion, these immigrant students are tracked into a program that is separate and unequal.

Teachers explain this pattern in ethnic terms by referring to immigrant students’ supposed need not for specialized remedial instruction, but for relaxation as a break from the difficulties of learning Japanese.

To read more, please visit The Asia-Pacific Journal, a peer-reviewed, open source journal that focuses on the Asia-Pacific region. Also, check out Language and Citizenship in Japan, an edited volume published by Routledge.