On the walls of immigration bureau offices in Japan, one can easily spot posters regarding dual citizenship. As the Japanese government does not recognize dual citizenship of its citizens, these posters usually say something along the line of  “let’s make it clear: choose your nationality,” “make a choice: no more duality.” Somehow, the rhetoric of posters seems to suggest that dual citizenship is unclear, undesirable, and duplicate, and thus a negative thing.

Today, in the face of increasing immigration and the growing flow of goods, services and persons across state borders, the concept of dual citizenship has arisen as a politically hot topic. While some argue that the recognition of dual citizenship is simply a legislative act that allows freedom, many believe it means more than granting of an extra passport. Opponents for the recognition argue it will complicate bureaucratic administration for the government. However, the most prominent argument behind the opposition is that the concept is not compatible with what “citizenship” entails. Citizenship has long been associated with state-control over its people – ‘citizenry’ – and, as T.H. Marshall defined, “a claim to be accepted as full members of the society” (Bloemraad, Korteweg & Yurdakul, 2008). Dual citizenship effectively challenges this idea of state-control as it allows the person to be a member of two separate societies, eligible for two separate sets of privileges, and obligated to two separate sets of duties. 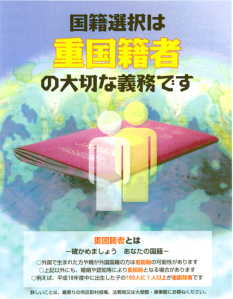 The confusion it causes is understandable. However, forcing one to choose one citizenship over another – the father’s over mother’s, the birth country over the country of residence, or vice versa – is this reasonable? In an opinion article from the New York Times, Mark Krikorian, the executive director of the Center for Immigration Studies argued that, for US nationals, engaging in dual citizenship basically means renouncing US citizenship, and is an absurdity that should be prohibited (2014). However, having two passports cannot possibly mean that one is betraying their ‘native’ country. For many immigrants, their children, and expatriates around the world, dual citizenship is about having freedom of association. Just because a person has moved from his/her native country to another, it does not mean he/she automatically renounces, forgets, or even wants to distance from the past. As time passes their emotional attachment and/or political participation can grow in both countries. In such situations, denying the chance of dual citizenship forcefully imposes what a person’s identity should be or where his/her allegiance should lie – does this not qualify as an infringement on freedom of personal choice? It effectively forces them to officially renounce their past so that they can be ‘loyal’ citizens of the present country of residence. If that’s what opponents want to achieve by invalidating dual citizenship, how effective could this possibly be anyway in forming allegiance?

It is more likely that dual citizenship is an irreversible and unavoidable occurrence in the face of globalization. Multiple national, racial and ethnic identities will continue to grow unabated no matter what governmental policies are in place. Recognizing multiple nationalities may be a nuisance for many governments, especially the ones who believe in their perceived ‘homogeneity’. Yet, eventually, the time will come that they have to admit the presence of diversity within the artificially set state borders.

法務省 (The Government of Japan Ministry of Justice). (n.d.). 国籍選択について (About choosing nationality). Retrieved May 18, 2014, from http://www.moj.go.jp/MINJI/minji06.html

5 thoughts on ““Making a choice” or “forceful separation”?”