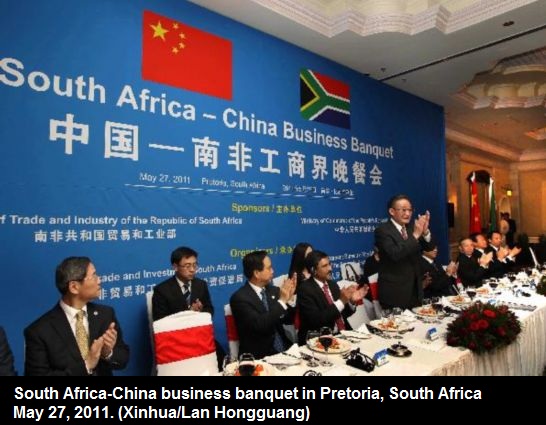 When discussing international migration, many groups of immigrants came to mind; coming from Europe, I am myself familiar with a large immigration population being entirely or only partially part of the society I found myself in. Additionally, as I live in Japan, I am lucky enough to experience immigration from another angle, from the other end. In turn, the latter has helped me to understand to a greater extent issues and complains voiced by first, second, and even third generation immigrants back in my country. Yet, one particular group has peaked my curiosity from the onset; the case of Chinese migrants in Africa, and particularly in South Africa (as I have come to realise that the overwhelming majority of Chinese is found in South Africa (Park, 2009)).

The reason why the case of Chinese migrants in Africa caught my attention stems from my inability to have considered the latter phenomenon. As mentioned earlier, as a European, I viewed migration from a Western perception (i.e. Migration in Europe, United States, Australia, New-Zealand…). When I first heard about Asian migration to Africa, I was surprised. However, later, I found myself comparable to the narrow minded people I have encounter in my life having difficulties accepting or even considering international migration. My astonishment turned into frustration and I now believe it is a moral duty to increase my knowledge concerning the aforementioned focus.

South Africa has had 2 waves of Chinese immigration in the past and one currently happening. In the early 1900, Chinese families migrated to South Africa, approximately 10,000 individuals, followed by business motivated Taiwanese in the 1970s and 1980s (approximately 6,000). The current wave which has started since 1990s is sourcing from mainland China (over 500,000; Park, 2009).

Four categories can be depicted when examining Chinese immigrants to Africa: temporary labor migration linked to Chinese development and investment in Africa, small-time entrepreneurs, in-transit migrants, and agricultural workers (Politzer, 2008). The second group, small-time entrepreneurs, is currently gaining in popularity as an increasing number of mainland Chinese are migrating to South Africa in order to pursue self-employment dreams, experience a slower pace and comfortable life, an improved weather, and a healthier environment.

Though mostly found in urbanized area, Chinese migrants are increasingly settling in poorer rural areas where the economic sphere is minor or inexistent in order to maximize their benefits by taking advantage of further favourable economic situations. They tend to open shops where everything from clothing to travel accessories, from everyday household appliances to toys and games for children can be found (Park, 2009).

The Chinese migration to Africa and particularly to South Africa can be depicted likewise Edwin Lin’s analogy referring it to a “small pond migration” (2014). The analogy stems from the English idiom “Big fish in a small pond.” Though the idiom connotes a rather pejorative meaning, the small pond migration refers to migrants purposely choosing a lesser developed country where their human capital will foster their ability to take advantage of the social environment. The migrants’ ability to conduct unchallenged business through their comparative advantage confers them the title of Big fish in a small pound.

Chinese Migration to South Africa is characterised and made possible through social connections. Most recent migrants had relatives or friends present in South Africa that helped them accessing and facilitating their migration in the country

Reasons for Chinese to migrate to South Africa have been depicted as such: for adventure, for self-employment, and for a comfortable lifestyle. Perhaps the effect of globalisation, access to international media and contact with international parties have promoted a desire for adventure and experiencing a life outside China. Most Chinese migrants that have moved to South Africa describe lifestyle in China as chaotic and stressful. Hence, moving to South Africa not only allowed them access to a slower pace of life associated to their environment, but also to start a self-employment type of business that, in time, will grant them enough capital and resources to “sit back and relax”.

When discussing assimilation theory, the case of Chinese migrants in South Africa seems to oppose the general trend usually associated with migration. First, most Chinese migrants seem to move to South Africa with the clear intention to return to the mainland once their economic goals are met. Second, as their migration is firstly seen as temporary, most Chinese immigrants do not speak the local language and very few of them have English proficiency (most of them come from a lower social strata with limited education background). Time and motivation to learn a language that would ease their living in South Africa is hampered by their aforementioned assumption. Third, the crime rate and the Chinese target some gang seems to favour, has pushed Chinese migrants to adopt a life style with very little interaction with the local population and heavy withdrawal into their own community. Most of them do not go out after sunset, fearful of aggression and robbery. Chinese migrants do not see social structure as a medium or an alleviation of this issue as police seem to be corrupted and do not protect them as they should. Assimilation seem thus to be unlikely as very little social structure are in place to promote a safe environment. The premise most migrants hold in regards of returning to their home country after meeting their objectives is also an important drawback to their assimilation. Though Chinese South Africans have been living in the country for few generation (this will be extended in the second post), most recent Chinese migrants opt for sending their offspring back to china where family member would take care of them.

Transnationalism can be viewed and explained through a progressive migration of Chinese individuals following example of their relatives, friends or even clan and village members. Remittance, charity, and Foreign Direct Investments (FDI) are also part of the transnationalism phenomenon that reaches Chinese migrants in South Africa.

Racialization is common and affects immigrants in their assimilation endeavour. The label “Jews of the East” hamper Chinese to further commit to an assimilation progress as in most cases, they are treated as outsiders and often scapegoated as the reasons behind a society’s ills.

2 thoughts on “Skimming the surface of a little known migration”