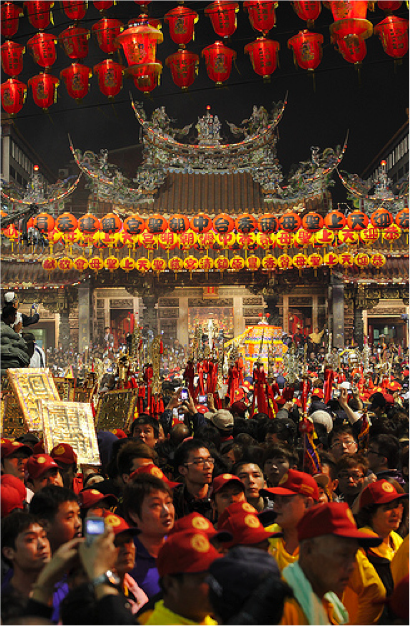 This picture took in front of the Dajia Jenn-Lann Temple, in Chinese name 大甲鎮瀾宮. This temple consecrates the most famous deity of the sea, Mazu. The enormous popularity of Mazu in Taiwan is evidenced by the more than 400 temples dedicated to her and by processions in which her icon is carried on a palanquin to spread her blessings. Also, such spectacles can be seen all over the island, known as the “Dajia Mazu Pilgrimage”, which snakes through several counties in central and southern Taiwan for eight or nine days in the third lunar month depends on Mazu’s birthday that usually begins in March or April.

When did the temple appear in Taiwan? It can be traced back to the early immigrant society, during the Qing dynasty (1644-1911). The immigrants, most of them came from Fukien province in China, had to across the Taiwan Strait riskily. In order to keep themselves from harm during the dangerous trip; they carried with their sacred images, incense for the deities or amulets to seek for spiritual protection. For example, most of the ships carried image of Mazu, to assure calm weather and safe passage. Later on, as the immigrants and their new villages started to flourish in Taiwan, then naturally they started to feel a need to show gratitude for the deities’ divine assistance that had blessed them. So, they began to build temples to providing homes for the deities to worship. Temples play the roles which are memorial buildings, sanctuaries for the deities, and centers of faith for believers. Also, temples became community centers to strengthen connections between believers as well as normal citizens, especially in rural areas. Since, special ceremonies are held by temples on deities’ birthdays. Generally we refer these carnival-like events as temple festivals. Often each event will consists of “welcoming the deities”, “an inspection tour by deities”, “chanting of sutras”, and “outdoor stage performances of Taiwanese opera or glove puppet shows” to entertain the deities. Temples provide the place for people to prepare the festival together, to worship, to bless and to enjoy.

Besides, to attend regular religious services at one location, small outdoor or indoor shrines of local deities are also very common, and often can be spotted on roadsides, parks, neighborhoods, and almost everywhere. These small pockets of religious atmosphere let people stop by and pray informally anytime. Many homes and businesses may also set up small shrines of candles, figurines, and offerings. For instance, some restaurants may set up a small shrine to the Kitchen deity who protects the success in a restaurant business. Students may visit a shrine to the Learning deity for good luck before a test. People in Taiwan, their lives strongly connect with temples; I think it’s because the need of the whole society then created the existence of unique religion. Of course, it’s totally different from Buddhism or Taoist, because it blends all elements together at first, and diffused into society even more deeply. This religion is called “popular beliefs” that whenever people feel the need to seek divine assistance they will just visit a temple.