I have been a big fan of Manga and Anime for as long as I can remember. I always admired how the Japanese style of drawing cartoon characters was different from that of popular western comics and animations. The characters in Manga and Anime have always stood out because they are unique. That is, many of them have exaggerated and flamboyant features and this always stood out for me and many other fans alike. Never did it ever occur to me that the way the Japanese creators illustrate their artistic work had significance on how race and ethnicity is viewed or construed in Japan.

As I began to read and watch more Manga and Anime, I began to notice how non-Japanese characters (people of color, specifically of African origin) were drawn and represented and many of them had very stereotypical characteristics. This can be seen in their dressing style, behavior, speech patterns and activities they are engaged in.  One such character is ChocoLove McDonell (pictured above) from the manga and Anime ‘Shaman King’. Where do I even start with this … His name is CHOCOLOVE!!! The character is an African American who has his hair in an afro, has exaggerated lips and wears an African wrap on the lower half of his body. Ohh and his animal spirit is a Jaguar! Many other non-Japanese characters are as controversial for example Mr. Popo from Dragon Ball and Jynx from pokemon who both appear to be in black face, Staff Officer Black and Killa from Dragon Ball, Bugnug or ‘dark eyes’ from Crying freeman et cetera. The characters mentioned are all African American with the exception of Bugnug  (which means Ant-Eater

apparently) who is the leader of the Askari (Swahili word to mean soldier) which is an African revolutionary organization.  Bugnug is first introduced to Crying Freeman manga readers when she launches a surprise attack on Yō Hinomura who is the main character.  She is illustrated to look ‘exotic’. She is beautiful with long curly hair but is muscular and masculine in her behavior. It is  impossible to compare her to the other Japanese females in the same manga as they seem more fragile and feminine. 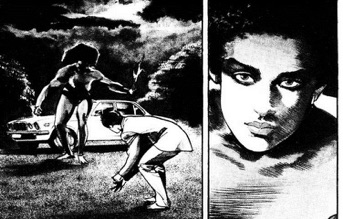 During the battle with Yō Hinomura (Crying Freeman), Bugnug is completely naked and only carries a blade. When she is finally defeated by Yō Hinomura, the two become allies and she later on gets his assistance to defeat a coup d’état in her organization. It seems as though the creators of this manga and anime went all out to display Bugnug’s supposed ‘Africanness’ by naming the character Bugnug which they go on to translate as Ant-Eater, having her fight naked, which I believe represents a kind of primitiveness and then including a coup d’état in her storyline which occurs within her revolutionary organization. So this leaves me to question why some characters of African ancestry are represented in this manner in manga and anime.  Do all the people of African ancestry have these characteristics and why have these stereotypes been continuously perpetuated?

When trying to answer these questions, it is important to note that Japan has always been a homogeneous nation and this has created a kind of distance between them and other cultures from many parts of the world. Thus, a lot of what Japanese people know and perceive has been spread through western media which is dominated by America through entertainment, news, music et cetera.  In the article ‘What does “American” Mean in Postwar Japan?’ by Yoshimi Shunya (2008) he writes that,

From the late1950’s onward, “America” was distilled as a uniform image with even greater power than before to gain people’s hearts. ..Until the early 1950’s the word “America” was simply invoked as a model to be emulated… “America” also came to be associated with the “pop-culture” of Japanese youth. As “America” became less direct, more mediated, and increasingly confined to images, it conversely became more interiorized and its effect on people’s consciousness became deep. (Yoshimi Shunya, 2008) 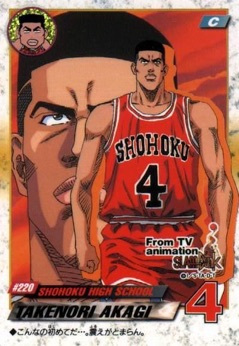 This exposure has been both positive and negative in that it has opened up Japan to other cultures and has made the Japanese people more aware of the differences between their cultures, traditions and those of people from other parts of the world but has also promoted the adoption of negative stereotypes thus most of what the Japanese know are imagined racial distinctions that have been created and promoted by the western media.

As I come to the end of this blog post, I would like to point out that not all black people are represented stereotypically in some of the Manga and Anime works and some Japanese characters have even been made to have darker skin tones or even display several characteristics that one would categorize as being black. An example that comes to mind is  Takenori Akagi from Slam Dunk!

In conclusion, I believe that as Manga and Anime continue to spread and attain wider audiences, their popularity will help raise awareness on how race and ethnicity is viewed in different parts of the world and this will in turn create a better understanding of these different cultures and ethnicities.