This is a short post that’s a heads-up to check out the site peoplemov.in, which provides visualizations of global migration. You can see data from 2010 on emigration and immigration flows for countries around the world. (Clicking on the pictures in this post will take you to the site.) 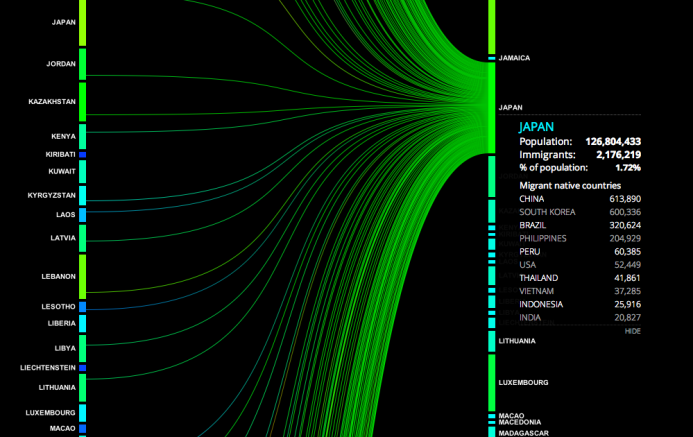 The top five source countries for immigrants to Japan are China, South Korea, Brazil, and the Philippines, and Peru. For Japanese emigrants, the site shows the top five destinations are the US, Brazil, Germany, Australia, and the UK.

I’ll leave the debate as to whether those “in-migrating” are “immigrants” or something else for another post. For now, emigrants are those going out, and immigrants are those going in. I know many in Japan say that Japan is not a country of immigration, and thus has no immigrants. Rather, it has “foreign workers,” “migrant workers,” dekasegi, etc. “A rose by another other name would smell as sweet.”

Migration out of Japan