With over two million hits, the UC Davis pepper spray YouTube video has definitely gone viral. But what did the viewers tune in to see? Students rallying against high university fees? Or to see a group of people get pepper sprayed?

The article ‘The art of reframing political debates’ by Ryan and Gamson (2006) that we looked at in class suggests that social movements spend large amounts of money and time trying to perfect a ‘winning’ message.  For protest participants and observers, this translates to something very tangible and persuasive on the day. But what about the people that rely on the news media for their information? Ultimately a different set of objectives (to sell newspapers, appease advertisers etc) brings about a very different framing agenda.  This is evident when you look at the news headlines following the UC Davis protest such as ‘Pepper spray incident prompts protocol appraisal’, ‘UC Davis suspends officers’ and ‘Anger rises as police pepper-spray protestors at UC Davis’. The ‘new’ issue is police brutality and you have to read three or four paragraphs in to find out what the original protest was about. Conflict and controversy are a lot sexier; getting more hits and selling more newspapers. Plus it allowed the media to repackage an issue that was nearing the end of its newsworthiness.

Media theorists refer to this as the protest paradigm, where violence and conflict is highlighted and protestors are framed as in ways that neutralise their message. Imagery, quote selection and headlines are all employed to frame-build and frame-set. Coming up to New Years Day there were a lot of ‘photos of 2011’ galleries online and you may have noticed the famous photo of an 84 year old Occupy Seattle protestor after being pepper sprayed. There are no visual cues to what the protest was about or where she is. 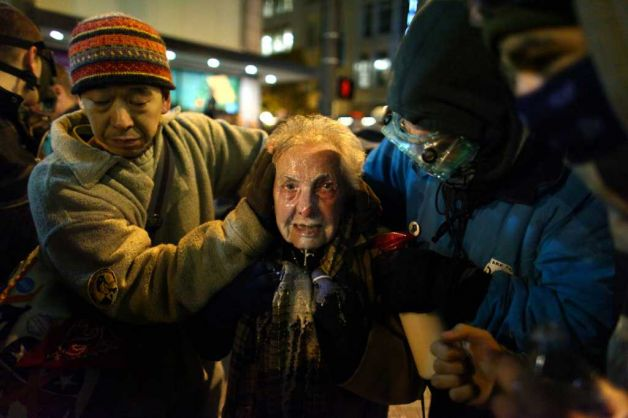 This issue really reinforces the challenges of frame control in the current media climate. Sustaining collective efforts is hard when contextual cues separate, for example, this protest from the wider ‘occupy’ movement. It also becomes easier for your protest to be trivialised. Nandos gimmick anyone? (Lt John Pike flavour – ‘5,000,000 Scovilles served directly into your face, while you sit’). It’s hilarious (sorry – it is!), trivialising and accessible without needing to know the background to the protest. It is also makes you wonder what the 2 million YouTube viewers really came to see… 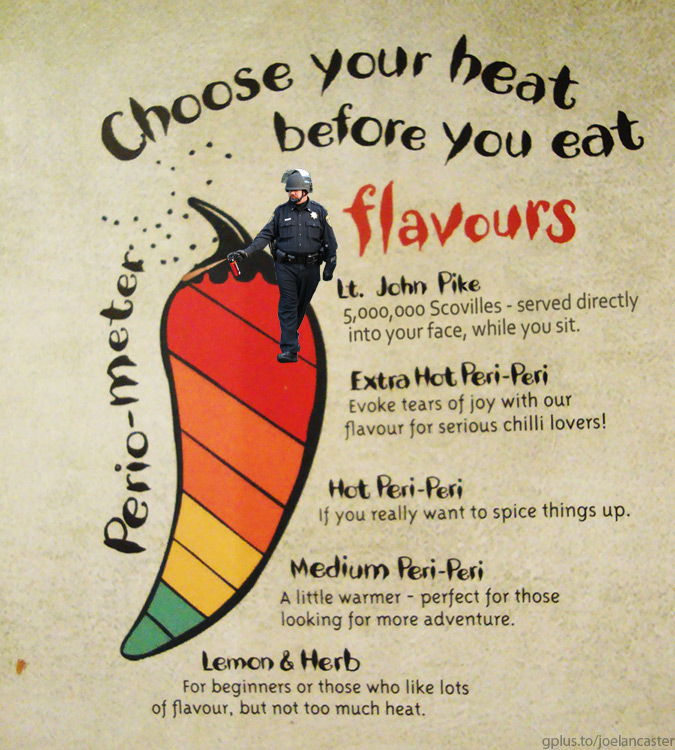